The “Blue Coast” is a strong dose of Mediterranean flair along 150 kilometers of coastline between Marseille in the west and Nice in the east. The glamour and glitter of legendary city names like St. Tropez, Cannes, Nice or Antibes contribute to one part of the flair, the other part is owed to the fantastic coastal scenery and the idyllic nature of islands like Iles d’Hyères or Ile des Embiez.area towards the Provence in the west, you will sail through the Calanques near Cassis. They offer a spectacular scenery with their steep limestone cliffs and fjord-like inlets that offer good anchorages. A natural wonder and a paradise for sailors! If the crew has enough time left, a visit of nearby Marseilles and its famous old town shouldn’t be missed.

There is a lot to see along the Cote d’Azur. Crews on a one week trip need to make a decision. We recommend to take either the western or eastern route: 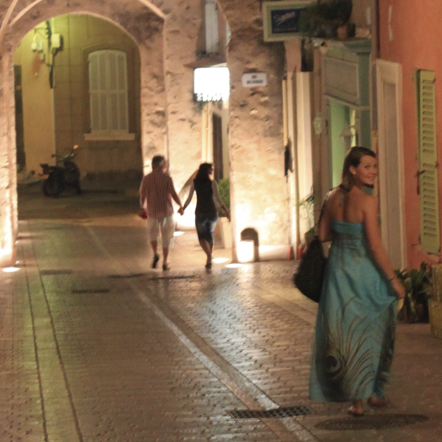 The western route takes you along the coast between Marseille and Toulon Bay, through the most spectacular natural beauties of the region. These include the Calanques near Cassis, a bizarre limestone coastline with fjord-like cuts. They offer wonderful anchorages and are a paradise for sailors. Further east, some of the offshore islands like Isle of Embiez and the Ile de Porquerolles are worth being visited . The latter is ideal for a walk through its vast natural reserve area.

The nice marina of Bormes Les Mimosas is recommended as a starting point for the eastern route. From there, the route takes you to St. Tropez, Port Grimaud, the very interesting “Venice” of the Cote d’Azur, to Cannes or even Antibes – if there’s enough time left. You should not miss a visit to the Iles de Lerins off the bay of Cannes. You will find nice places to anchor and swim in the shallow water inbetween the islands of St Marguerite and St Honorat – if there is not too much boat traffic.

The Cote d’Azur offers a high number of well equipped marinas. Price levels are very different, depending on the season and region. They range from 40 – 60 € for a 40-foot yacht up to 100 € in Antibes. During July and August, the marinas are often overbooked, and the crew should be prepared to look for alternative options.

In terms of price levels, these two regions are not on the top, as often assumed, but quite moderate – if you take into account that it is quite easy to get there from many places in Central Europe.

Corsica  The ancient Greeks had the expertise: they gave the fourth largest island in the Mediterranean the name “Calliste,” which means the beauty. This is indeed where island sets standards. On its west coast, Corsica impresses through the unique panorama of rugged cliffs, rising up to 2700 feet, interrupted by wild gorges and beautiful bays with crystal clear water. Further south, visitors are stunned when looking at the Cretaceous rock scenery of Bonifacio. The legend says that Odysseus found shelter in the well protected fjord harbour of the town during his ten years wanderings through the Mediterranean. Further down the Strait of Bonifacio, you will find the Lavezzi Archipelago, a marine reserve with a rich marine life between towering boulders and turquoise waters. The east coast of Corsica is a lot softer than the west and offers endless sandy beaches. Every year during May, the flourishing vegetation makes the whole island look like a colourful sea.  An island roundtrip along the nearly 300 miles of coastline requires 2 weeks of sailing. Some crews take Bastia as a starting point, coming from Elba. Others arrive from the northeast side of Sardinia.  The most beautiful bays on the west coast can be found between Calvi and St. Florent, or between south of Ajaccio and Solenzara in the south east. For a one week charter trip, recommended starting point is Ajaccio, the birthtown of Napoleon, with the choice of either sailing to the north or the south.  The navigation around Corsica requires good experience and careful attention of the skipper. Looking closely into the charts is essential when sailing along the coast, but still not enough, as sometimes washed and unmarked rocks must be circumnavigated. Along the west coast, Mistral winds may challenge the sailing skills of the crew, while in the south it is the cape and jet effects in the Strait of Bonaficio that can cause some headache. All in all, Corsica is a unique and exciting sailing area for experienced sailors.

Mild Mediterranean climate. During summer, thermal breezes with 3-4 Beaufort rise up over the day with directions from southeast to east. The dreaded mistral winds may fall in from northwest every three weeks on average during summer, in spring and autumn more frequently. They may persist over several days, with a strength of 6-8 Beaufort or even above. As the Mistral winds blow down the Rhône valley, their impact is stronger towards the west, while it is usually moderate in the eastern parts of the coast between St Tropez and Cannes. However, strong Mistral have also hit Cannes in the past.
Corsica: During summer, dominating wind is the Libeccio with moderate strength from west to southwest. The dreaded Mistral can come up any time on the west coast, although it occurs less frequently in the summer. The Strait of Bonifacio is famous for its jet winds. In combination with Mistral, they can reach gale strength with directions from west. Moderate winds on the east side of the island.

For Cote d’Azur and Provence: Crews coming through Germany/France often travel by car or train to Marseilles. There are also very cheap flight connections to Marseilles or Nice from many European airports.
For Corsica: Flights to Ajaccio, Calvi, Bastia (on France), Elba and Olbia (Sardinia) and Pisa on the Italian mainland. Ferries from Marseilles, Nice, Genoa, Livorno. 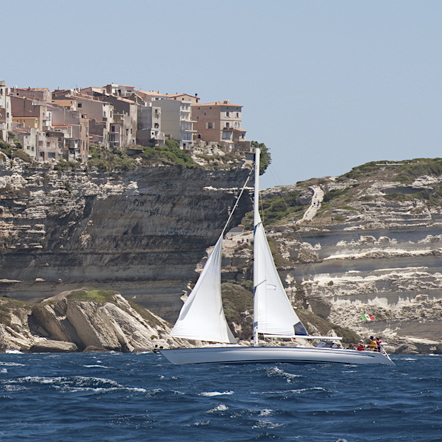 CATCH YOUR DREAMS – SAIL WITH US!