• islands of volcanic origin with mesmerizing natural landscapes
• wind conditions, as well as rather large distances between the islands, require high qualifications from the team

Yacht Charter in the Canary islands

In the Canary Islands, the yachting season lasts all year round, and a constant trade wind is guaranteed, which ensures a pleasant coolness in hot summers. Winters in the Canary Islands are mild. You can still swim at Christmas and the water temperature does not drop below 18–20 ° C. The islands are of volcanic origin, the landscape sometimes resembles a Martian one: remnants of old volcanoes, lava fields, deserts, gorges and steep cliffs give way to lush greenery and long sandy beaches.
The Canary Islands boast a well-developed yachting infrastructure, in particular modern, well-equipped marinas. The coastline is mainly formed by sheer cliffs and there are not many places to anchor. In addition to the sun, sea and nature, the Canaries can offer an extensive tourist program, especially in Gran Canaria and Tenerife 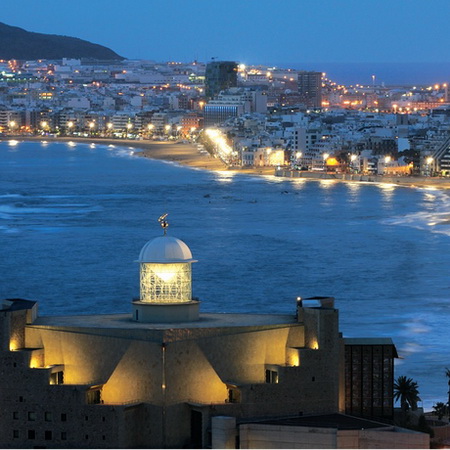 It is called «the island of a thousand volcanoes». Here you can take an extraordinary trip through the black volcanic desert with countless craters, lava flows and ash cones and visit the Timanfaya National Park. On the north coast of the island there are conditions for diving.

The island captivates with a variety of natural species. It has everything from the snow on the extinct volcano of Pico de las Nieves, the island’s highest point (2000 m), to famous beaches with fine white sand such as Playa de Inglés and Maspalomas. The natural attraction of Gran Canaria is the narrow gorges that rise from sea level to the very mountains. Tourist centers with numerous excursion and entertainment offers are located in the southern part of the island.
Tenerife is the largest of the Canary Islands with the bustling capital Santa Cruz. It has the highest mountain in Spain — Teide Peak, which rises 3700 m above sea level. Several climatic zones replace each other on the island: from comfortable temperatures in the northern part to the hot, sun-spoiled southern part. During the winter months, you can relax on the beaches or hike the snow-covered Las Cañadas slopes.

The Hierro, a tourist gem known to a few insiders, was considered the end of the world during Columbus’s time. The island is located far from the popular hiking trails. The windless south coast of the north-east trade wind is ideal for anchorage.

La Gomera is a favorite vacation spot for nature lovers who yearn for peace and quiet.

All year round — spring, in summer the temperature rises to 32 ° С, in winter it fluctuates between 24 ° — 29 °, the average annual temperature is 22 ° С. Moderate trade winds of up to 3-6 points prevail, close to the islands — and more, due to the «nozzle effect» and headland effect. In the spring or fall, sailing can be difficult with the sirocco, a hot wind from the Sahara desert. Recommended sailing season: all year round, best from November to March.

CATCH YOUR DREAMS — SAIL WITH US!